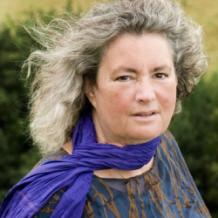 Starhawk is one of the most respected voices in modern earth-based spirituality. She is also well-known as a global justice activist and organizer, whose work and writings have inspired many to action. She is the author or coauthor of twelve books, including The Spiral Dance: A Rebirth of the Ancient Religion of the Great Goddess, long considered the essential text for the Neo-Pagan movement, and the now-classic ecotopian novel The Fifth Sacred Thing. Starhawk's newest book is The Empowerment Manual: A Guide for Collaborative Groups, published November 2011, from New Society Publishers.

Starhawk is perhaps best known as an articulate pioneer in the revival of earth-based spirituality and Goddess religion. She is a cofounder of Reclaiming, an activist branch of modern Pagan religion, and continues to work closely with the Reclaiming community. Her archives are maintained at the Graduate Theological Union library in Berkeley, California.

She is a panelist for the Newsweek/Washington Post website on religion, "On Faith," and also contributes to Beliefnet and ZNet, as well as maintaining her own blog, "Dirt Worship." You can also find her on Facebook.

She holds a B.A. in Fine Arts from U.C.L.A. In 1973, as a graduate student in Film at U.C.L.A, Starhawk won the prestigous Samuel Goldwyn Creative Writing Award. She received an M.A. in psychology with a concentration in feminist therapy from Antioch University West in 1982. She has taught in several Bay Area colleges and universities, including John F. Kennedy University, Antioch West, the Institute of Culture and Creation Spirituality at Holy Names College, and Wisdom University. She is presently adjunct faculty at the California Institute of Integral Studies.

Starhawk travels internationally teaching magic, the tools of ritual, and the skills of activism. She lives part-time San Francisco, in a collective house with her partner and friends, and part-time in a little hut in the woods in western Sonoma County, California, where she practices permaculture in her extensive gardens, and writes.