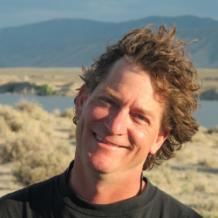 Brock Dolman is a co-founder of the Sowing Circle, LLC Intentional Community & Occidental Arts and Ecology Center (www.oaec.org), where he is a Director of the Permaculture Program, Wildlands Program and the WATER Institute in Sonoma County, California.

He is a wildlife biologist, permaculture designer and watershed ecologist. Brock has worked as a Permaculture educator/consultant internationally in Mexico, Costa Rica, Ecuador, U.S. Virgin Islands, Spain, Brazil, China, Canada, Zimbabwe, Democratic Republic of Congo, Cuba and Haiti & and widely in the U.S.A, and has co-facilitated over 80 Permaculture Design Certificate Courses since 1995. He has been a lead instructor on two IPC PDC's: IPC8 PDC in Sao Paulo in 2007 and IPC11 PDC in Cuba in 2013. He has been featured in the award winning films: The 11th Hour by Leonardo DiCaprio; The Call of Life by Species Alliance; and Permaculture: A Quiet Revolution by Vanessa Shultz; and Russian River: All Rivers. In October 2012 he gave a City 2.0 TEDx talk: (http://www.youtube.com/watch?v=Izf6D1LQlFE). In 1992 he completed his BA in Agro-Ecology & Conservation Biology, graduating with honors from the University of California Santa Cruz with the Biology Department and Environmental Studies Department.